After attending and officially opening last year's Basketry Trade Fair, HRH The Duchess of Gloucester GCVO indicated she would like to learn to weave for herself.  The date was duly chosen for the private visit and HRH and her friend, Clare Hollingsworth were joined by the Prime Warden, Anne Holden and Liveryman, Judy Tayler-Smith to learn to make with rush, expertly taught by Yeoman, John Page.

A very big thank you the Walduck family and all the staff at the Bedford Hotel for their kindness and generosity.
​​​​​​​
HRH The Duchess of Gloucester GCVO has been an Honorary Liveryman of the Worshipful Co. of Basketmakers since 1991, it was our absolute pleasure to host the day for her.

Following the success of the Trade Fair in 2019, Prime Warden Anne Holden was very keen to continue support to the Basketmaking Trade again and the Basketry Showcase at the Dutch Church, Austin Friars was created.
​​​​​​​
Many talented Basketmakers and Weavers showed and sold a wonderful diverse range of products, some also demonstrated their craft creating further interest.
The event was very well attended in the morning by Masters, Consorts and Clerks of many Livery Companies, along with many other distinguished guests. The afternoon was also well supported by other members of the Basketmakers' Company, the Basketmakers' Association and invited guests.
Prime Warden, Anne Holden welcomed the guests and encouraged all to tour the Showcase and enjoy viewing the accomplished Basketry items on display.
Thank you to everyone involved for all your efforts contributing to this successful event and we hope that it will become an annual event to promote our special trade to the City and a wider audience.

​​​​​​​We were delighted to, once again, have an entry in the Worshipful Company of Poulters Inter-Livery Pancake Race.
Under Warden, Roger Harper MBE, ran a valiant race, just missing out on the finals. He was supported by Prime Warden, Anne Holden and several members of the Basketmakers' Company.
Some Livery Companies also enter the Fancy Dress Competition which adds to the fun of the occasion.
The weather was very kind, though it was good to be able to thaw out in the Guildhall Crypt where a buffet lunch was served. Now in its 16th year, the lunch and the race is held in aid of the Lord Mayor's Appeal and the Master Poulter's Pelican Trust.

Liveryman, Jean Aslet kindly playing the piano during the meal. 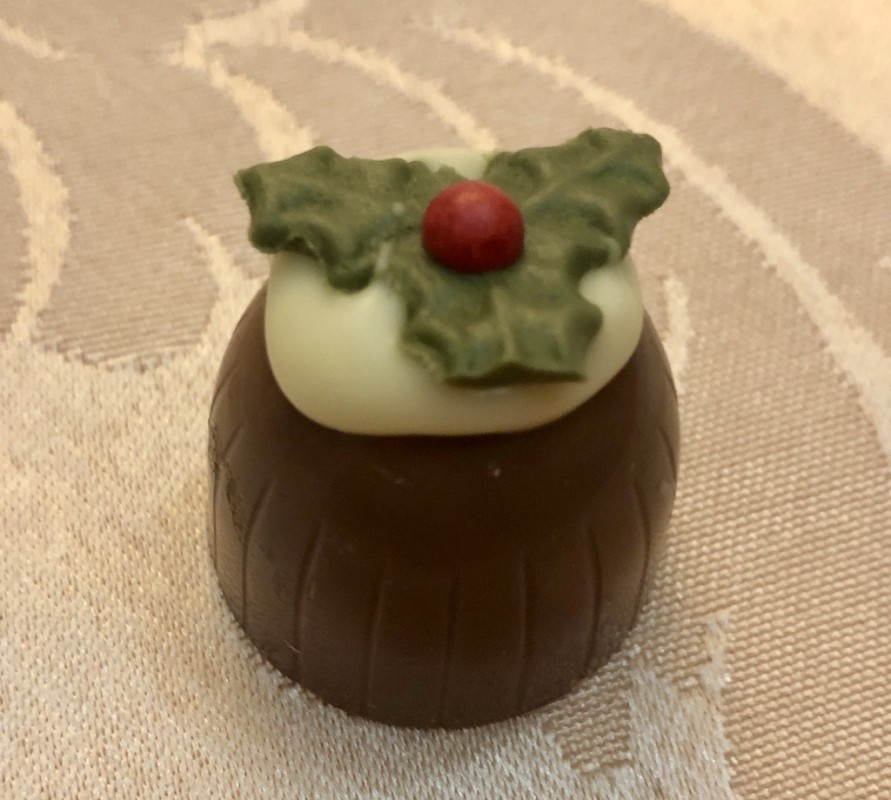 A packed congregation at the Guild Church of St Margaret Pattens enjoyed a wonderful Service of Nine Lessons and Carols followed by mulled wine & mince pies. The choir led the Carols, accompanied by the newly restored Organ echoing though the Church. Two of the nine lessons were read by Prime Warden, Anne Holden and Clerk, Sarah Sinclair.
​​​​​​​This annual service is shared with the Pattenmakers' Company and we were delighted some of their members joined us at Bakers' Hall after the service for a delicious supper. It was a lovely relaxed gathering, Prime Warden Anne Holden thanked everyone for attending and took the opportunity to wish them a very Merry Christmas. 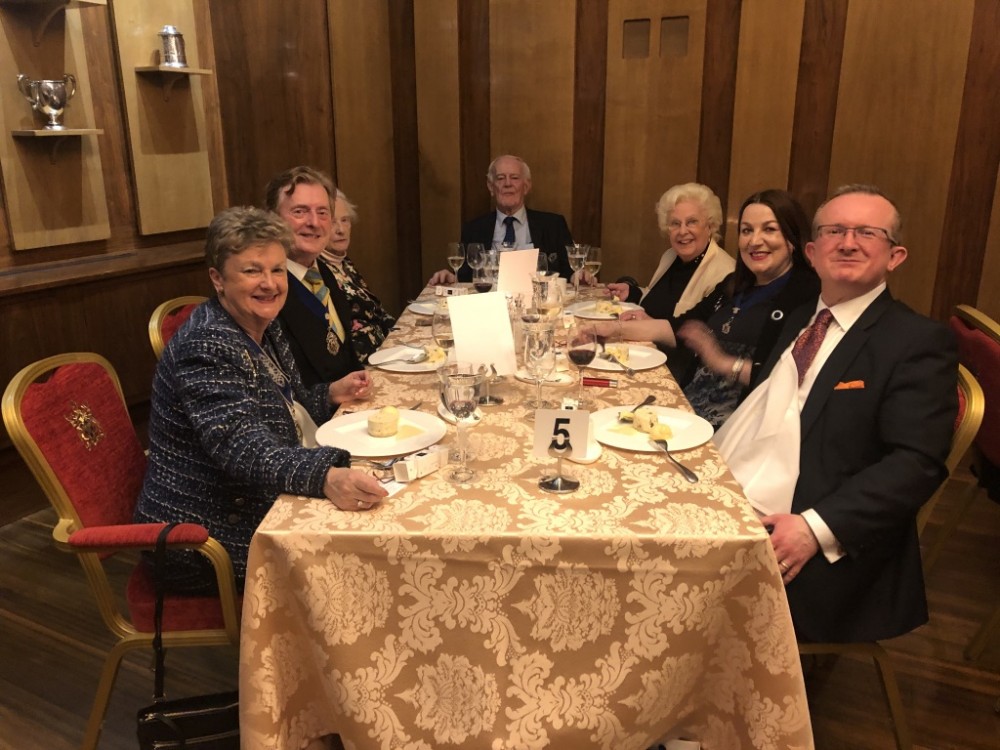 A keen gathering of members and their other halves met at the Imperial Hotel for a most creative and enjoyable day making willow Christmas trees and rush angels, reindeer and stars.  Under the patient tutorage of Sandra Barker and John Page the group’s creative inner-self came to the fore and all went home with delightful sustainable Christmas decorations and happy memories of learning a little of the skills the Company is so proud of.
​​​​​​​
A big thank you to the Walducks for their generosity.

The 804th Lord Mayor’s Show took place on Saturday 9th November with Gog and Magog taking their position at number 12 in the procession, pulled by members of the Guild of Young Freeman and ably supported by members of the Basketmakers’ Company.  Many a favourable comment could be heard from the crowd and the tabards gave the Company a high profile in the procession. The weather was kind until the final run home to Guildhall when we all got a little damp.
A big thank you to Sandra Barker and her team for their sterling efforts and care of the giants.
It was a great day.

Installation Day is one of the most important days in the Company’s Calendar and this year took place on Thurs 10th October.
The Wardens, Past Prime Wardens and Court Assistants processed into the Guild Church of St Margaret Pattens to take part in a lovely service along with many other Members of the Company. An interesting sermon was given by Reverend Andrew Keep and the accomplished choir led the hymns.
​​​​​​​
Members then moved to Bakers’ Hall for lunch before Common Hall and the Ceremonial Court in the afternoon.  At Common Hall Immediate Past Prime Warden Chris Hipkins summarised his time as Prime Warden, citing the success of the special and unique events held during the 450th Anniversary year of the Company.

Jonathan Pyzer reported on the Comapny's finances and declared them to be in a comfortable position. Graham Aslet announced how donations by the Charitable Trust have been made during the past year.

There were a couple of 'Goodbyes' to be said, firstly Christiane Gunzi will be stepping down from her Honorary role as Trade Advisor, and Fiona Janczur performed her last official duty as Clerk to the Company. Chris Hipkins thanked them both and presented each with a flower filled basket. It was very clear how much Fiona's hard work and dedication has been appreciated over the last five and half years. Fiona responded with a very emotional yet entertaining speech, she also wished the Company and the new Clerk the very best for the future.

The Ceremonial Court was opened where Lewis Bloch was installed as the new Upper Warden and Roger Harper MBE as the new Under Warden. Then Liverymen David Crowley, Sahsa Keir, James Lord and Vicky Nugee were installed as the new first year Stewards.
​​​​​​​
With the new team in place we look forward to another successful year ahead.
​​​​​​​ 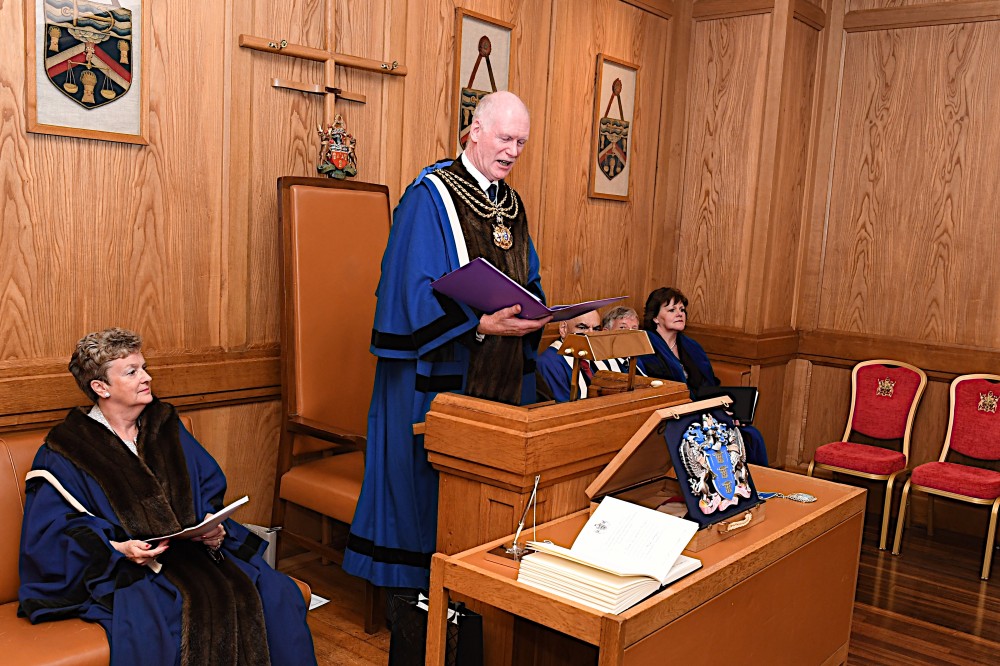 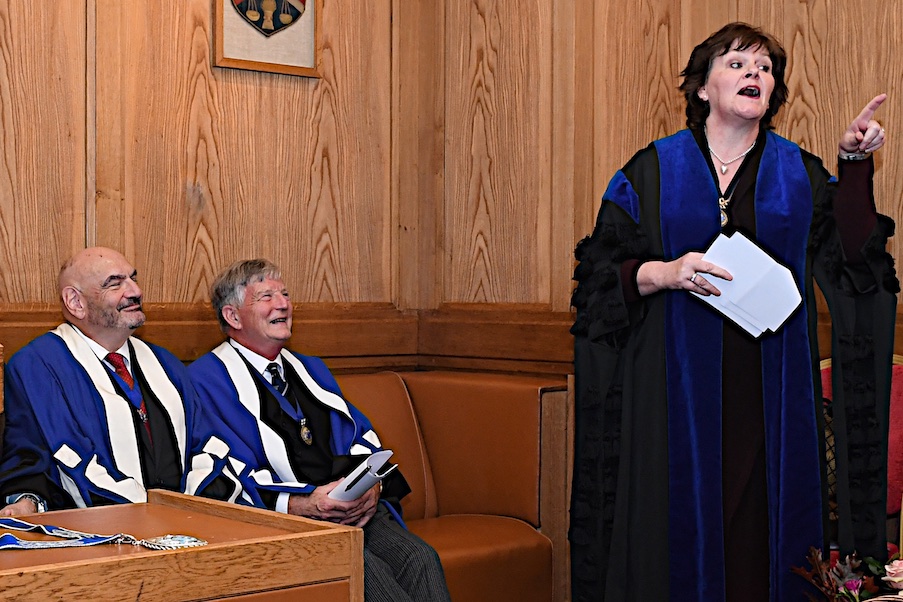 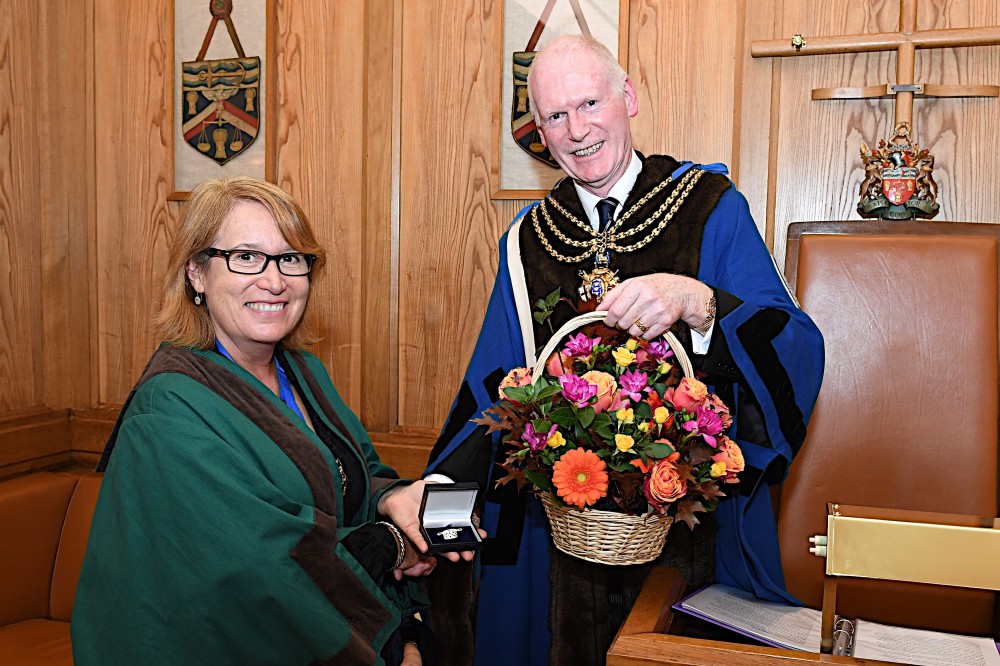 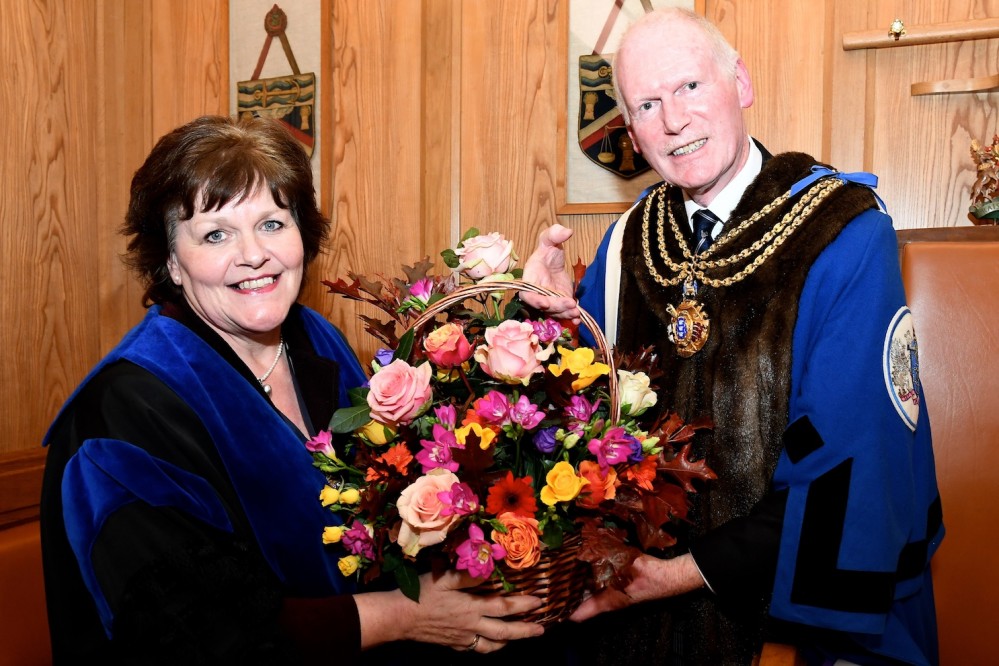 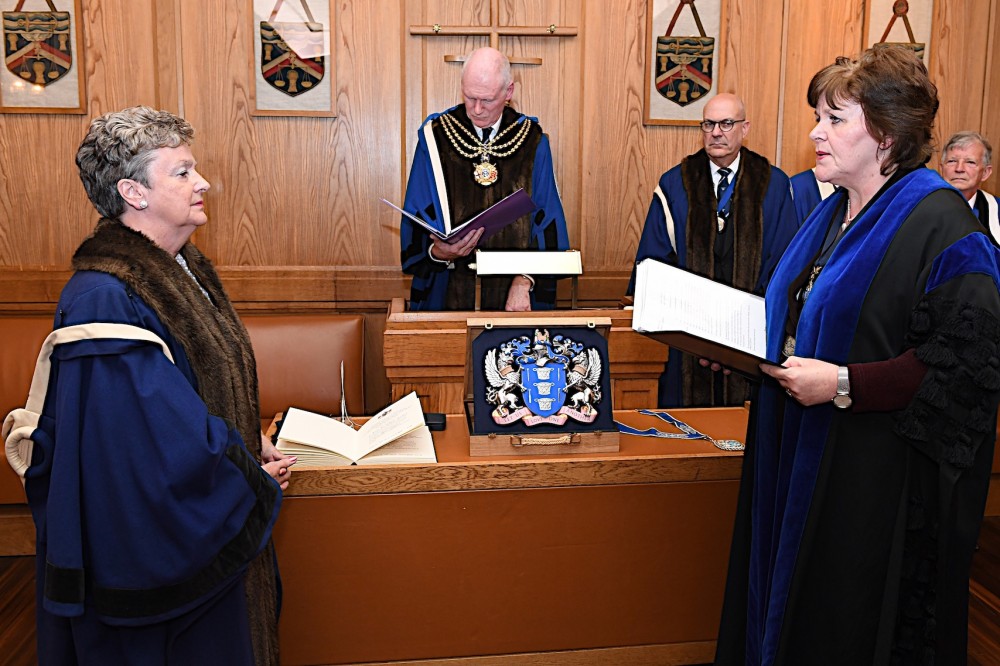 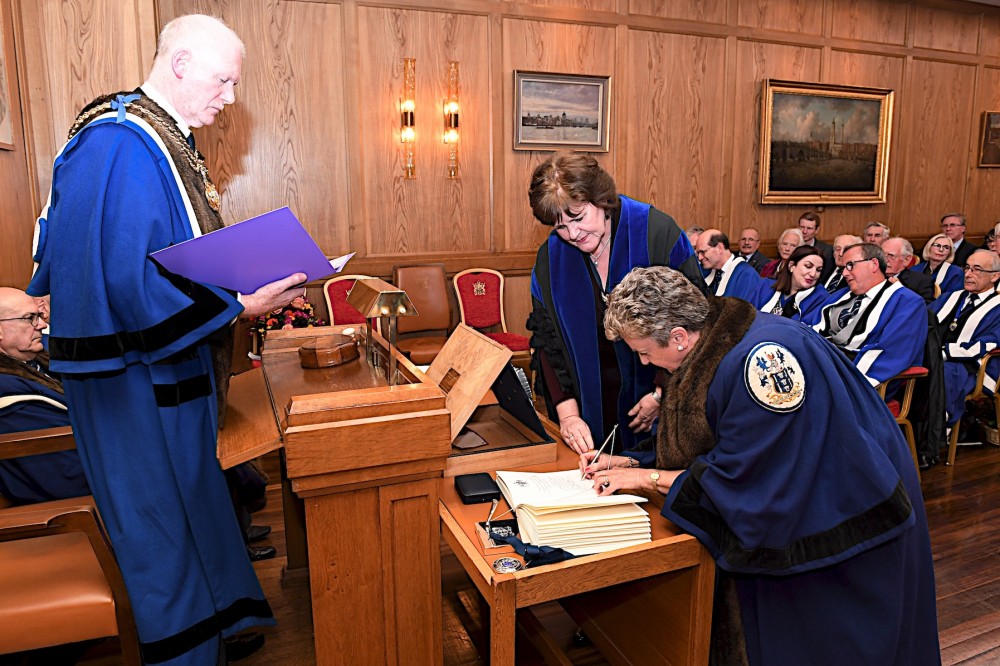 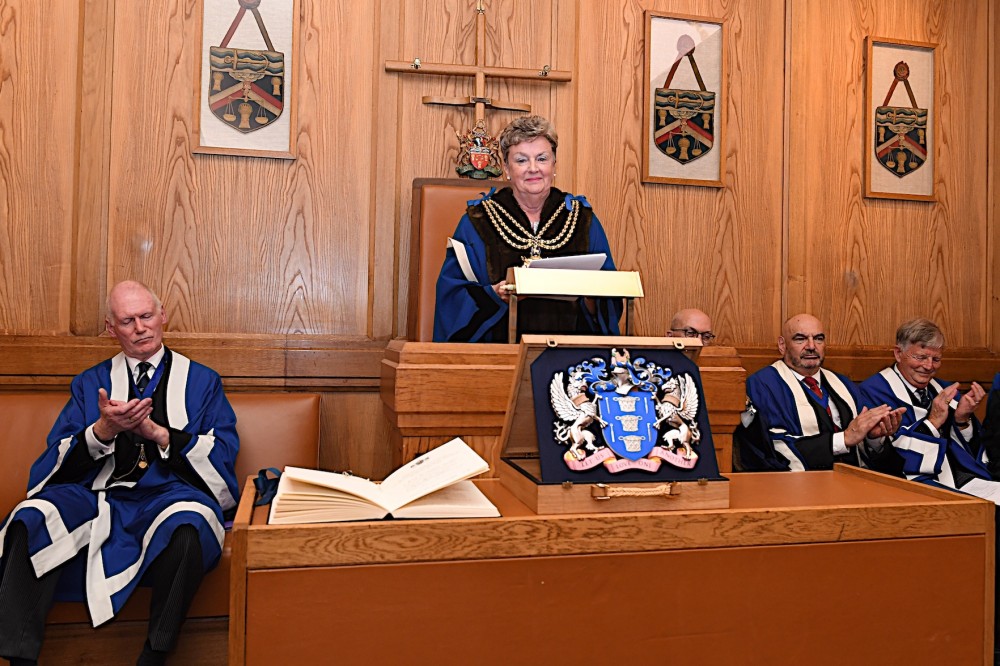 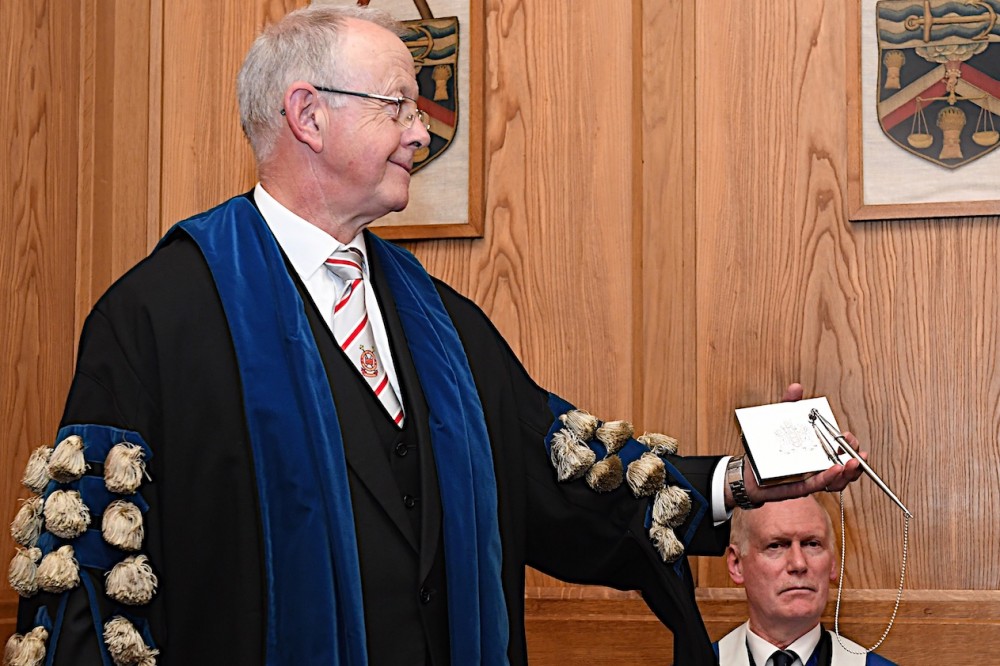 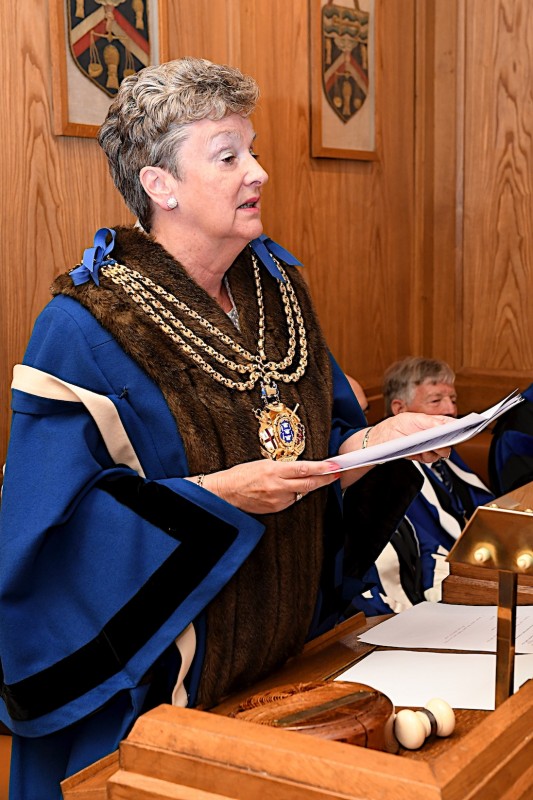 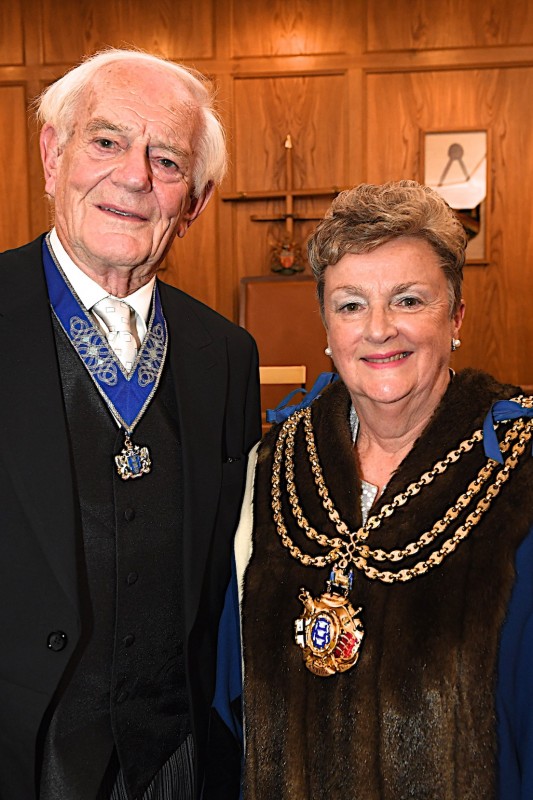 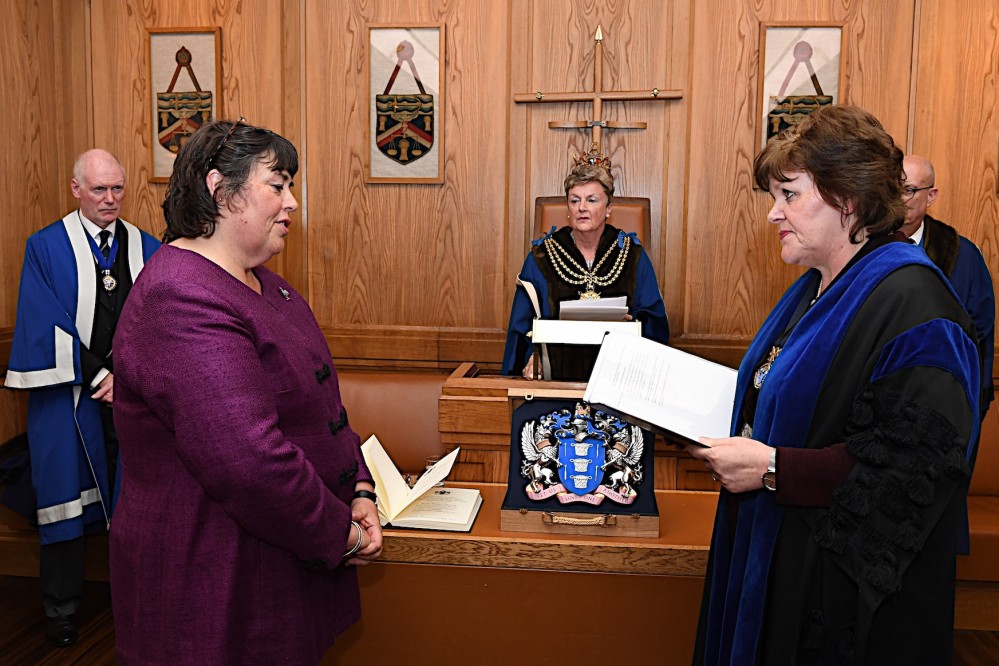 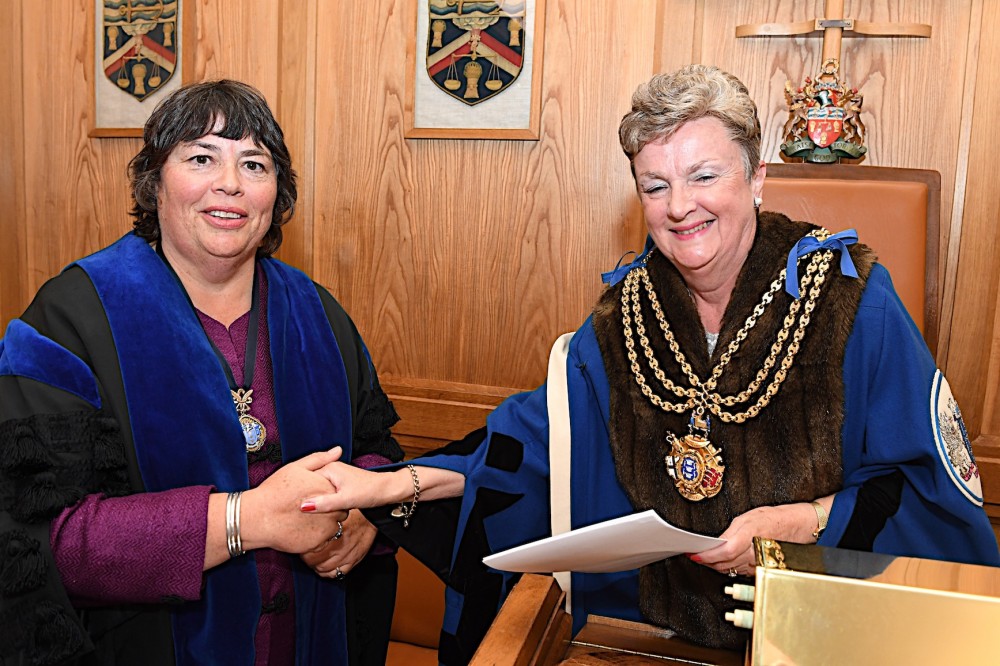 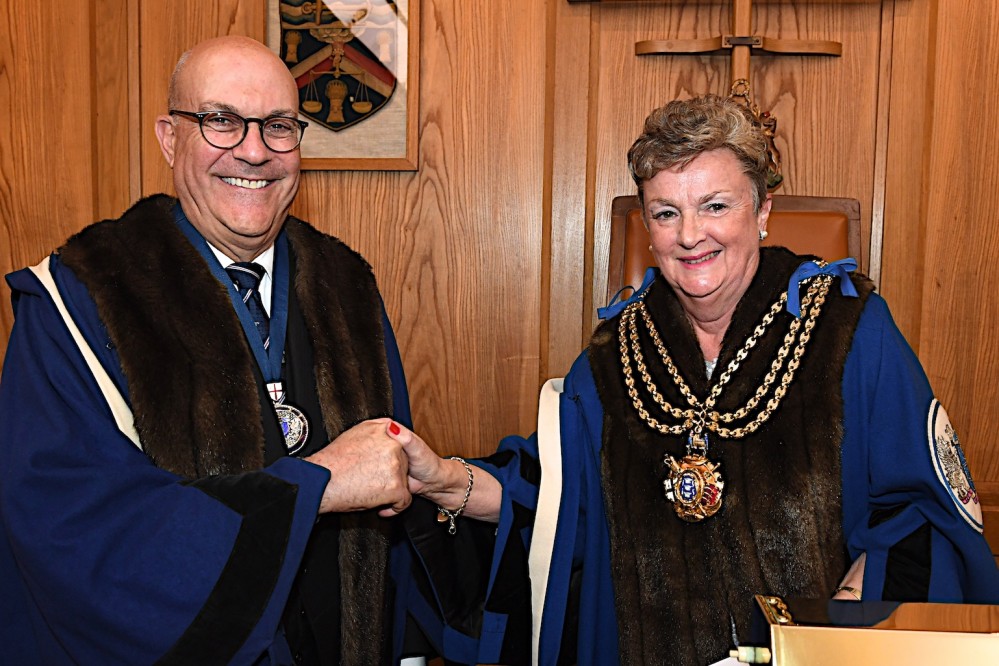 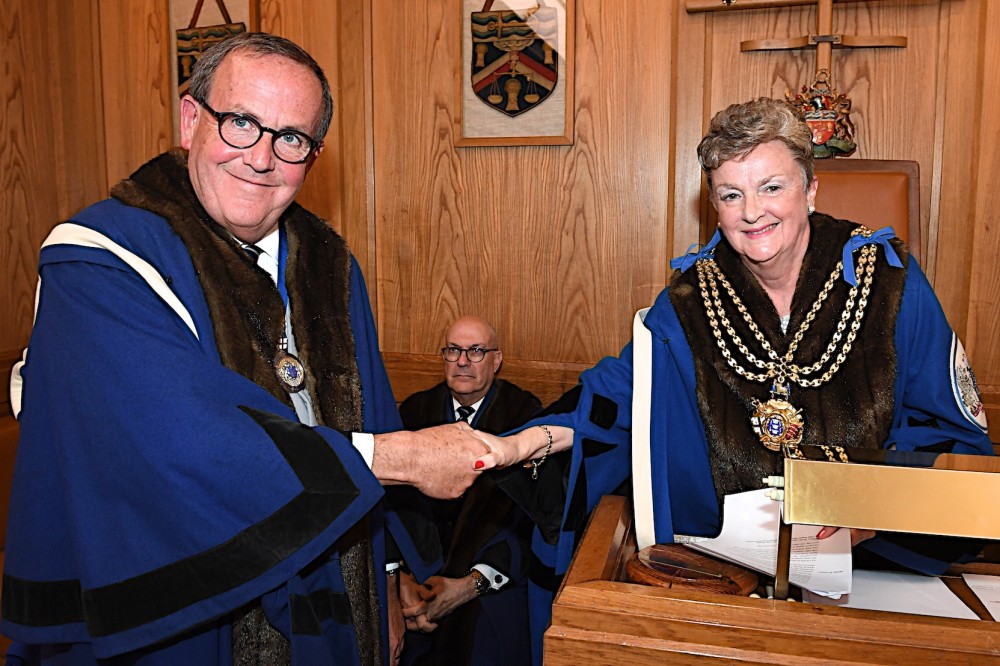 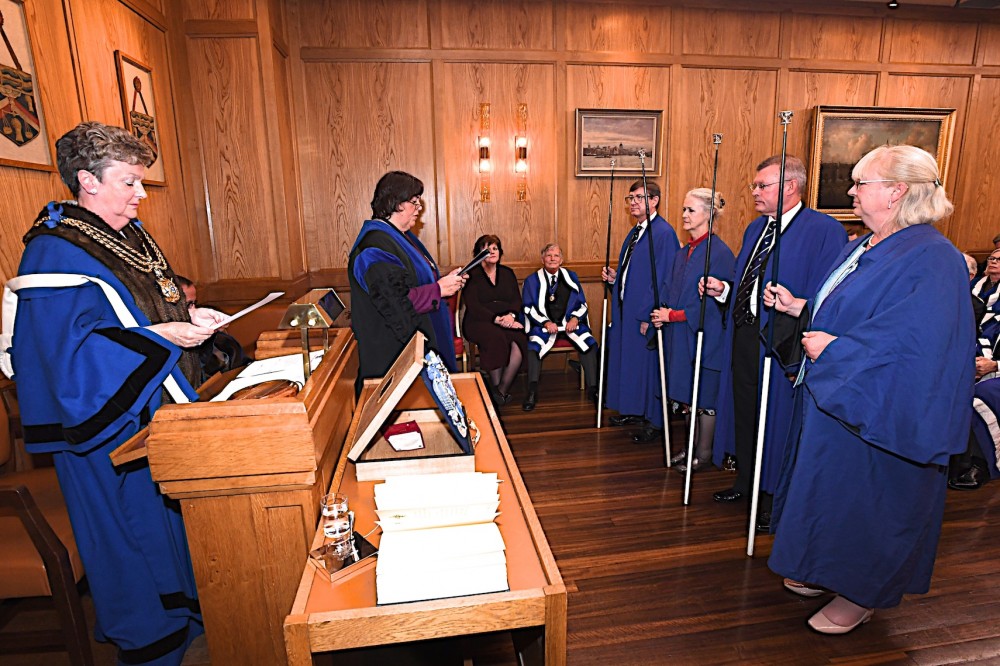 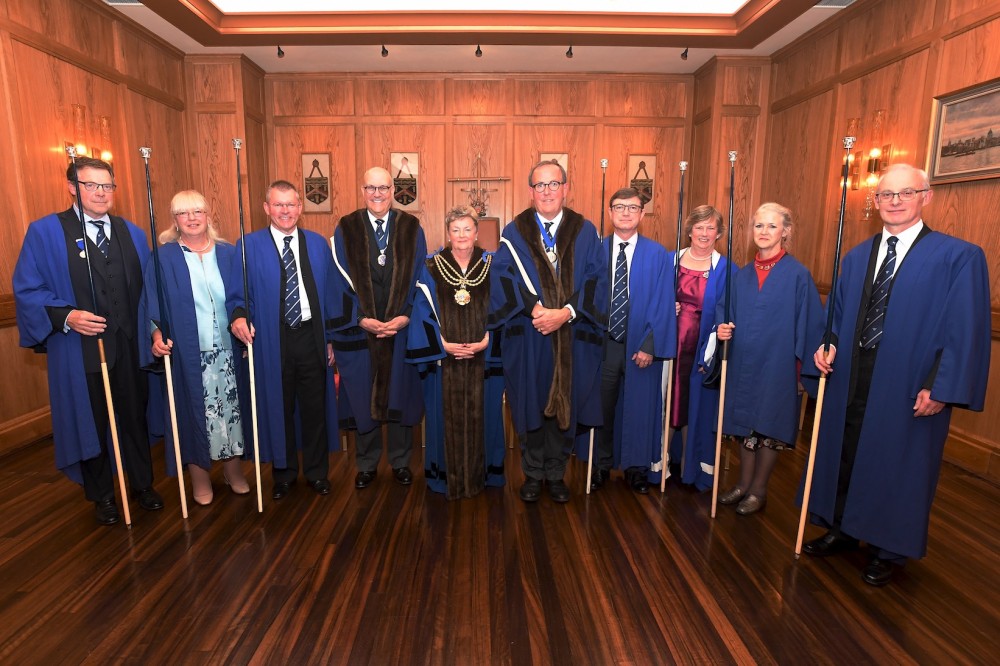 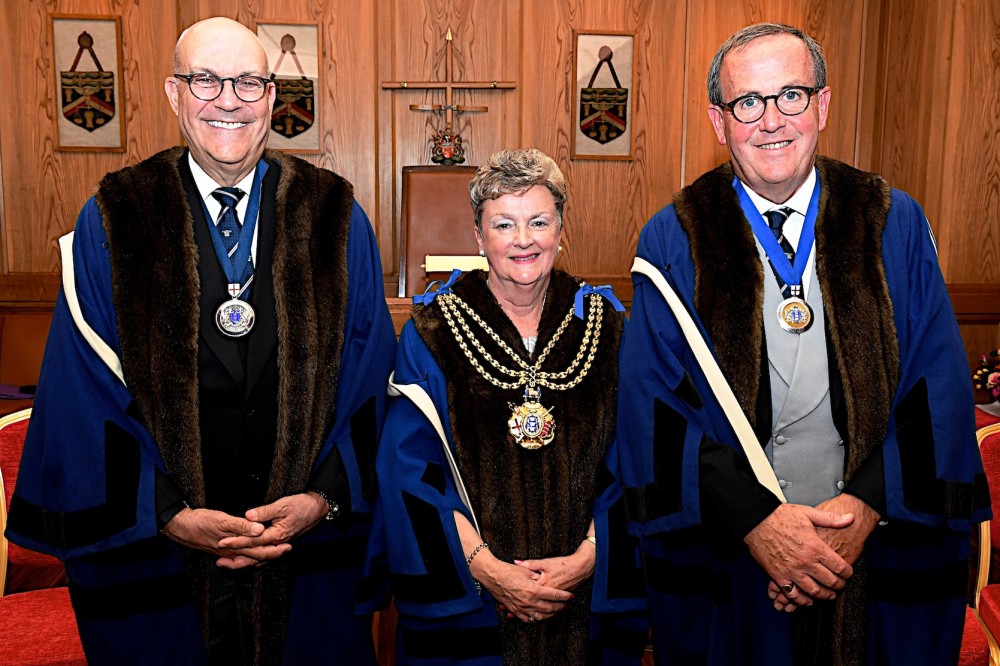